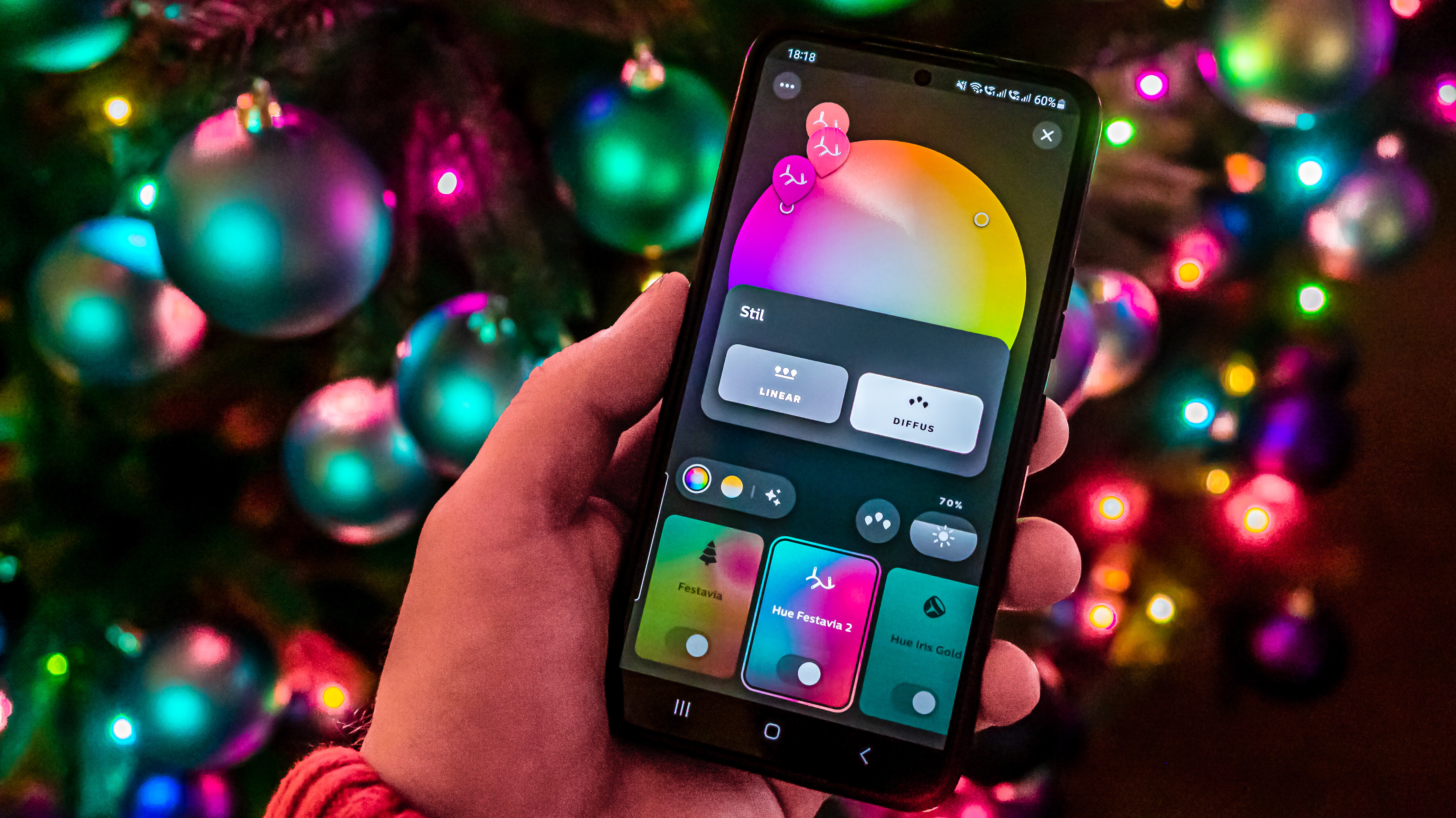 Just before the start of Advent, Signify is adding a networked chain of lights with 250 mini LEDs to its Philips Hue system for smart lighting. The Festavia model differs from other smart light chains due to the customizable display with up to five color tones in the RGBW spectrum at the same time. Heise online was able to gain first impressions of this at a product presentation.
The 20 meter long chain of lights offers enough cables and diodes to put a two meter high Christmas tree used for display purposes in the limelight. This was not in the interior for nothing. The light chain lacks the seals for outdoor use.

The Philips Hue Festavia can be controlled either via Bluetooth command directly from the smartphone or via a ZigBee bridge. In both cases, the identical manufacturer app for Android and iOS serves as the control software. In addition to the usual control commands, it has special functions ready for the Festavia light chain. The “Sparkle” effect is new. It provides a gentle pulsing and is supposed to appear like glitter – which, however, appeared very subtle and was hardly perceptible without a focused look. Two new color effects proved to be significantly more effective.

Desired colors in random mode or with a gentle gradient

In the “diffuse” operating mode, you choose five color tones, which the software randomly distributes to all diodes. In contrast, the “Linear” operating mode creates a color gradient. If it is activated, only three colors can be specified manually. They then apply to the beginning, middle and end of the chain of lights. In the two areas in between, the software calculates suitable nuances, so that the diodes shine in a total of five colors in this scenario as well. This was pretty to look at and worked as promised.

However, it was not possible to intervene more individually in the color distribution. Unlike the smart light chain from Twinkly , for example, it is not possible to specifically assign a desired color to certain groups of diodes. In addition, the Festavia model cannot depict comparably complex treadmill effects.
advertisement

The dartboard floodlight from the Make 4/22

Nevertheless, as with other current Philips Hue products, simple dynamic color changes are possible. Either the software changes between related colors in a continuous loop controlled by the algorithm, or users synchronize the light with music via Spotify and Samsung SmartThings. Then it pulsates to the beat of Christmas carols. The music comparison requires a ZigBee bridge and an Internet connection, it is not possible in Bluetooth mode. The sync with Christmas songs via Spotify was harmonious in the presentation and showed no recognizable time lag.
The Philips Hue Festavia light chain will be released on November 11 and is initially only available in the manufacturer’s online shop.

The price of 160 euros is at the upper end of what fairy lights for smart homes cost. Philips Hue has already added the new operating modes specially designed for the Festavia model under the hood in the latest update of the mobile control app. As usual, it can be downloaded for free.