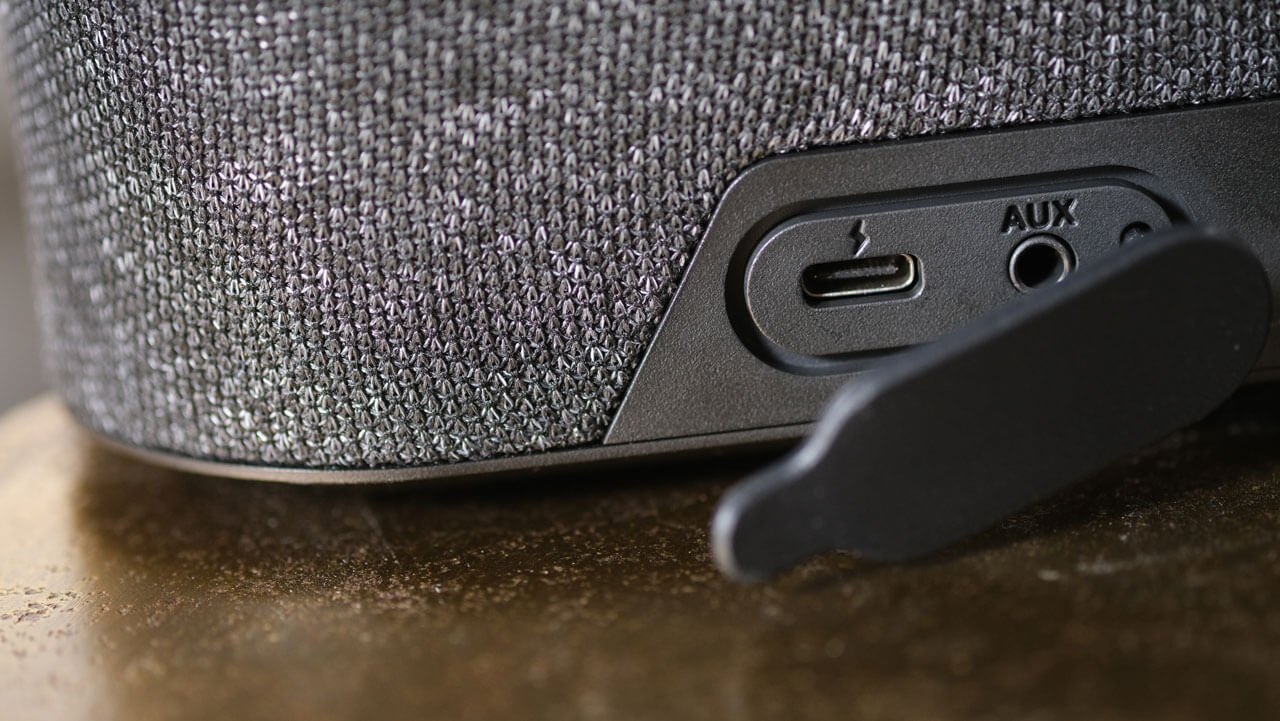 Sehatnews –  Nubert asks for reception – with the 1.6 kilogram light and just 25 centimeters wide radio nuGo! ONE, which boasts a built-in 9800mAh battery and fishes in both FM/FM HD and DAB+ signals out of the air. We briefly tried out and listened to the mobile Swabian.
If you want more than the usual radio, the Nubert nuGo! ONE via Bluetooth (codecs: aptX HD and AAC) with other devices and thus also acoustically stages internet streaming or music stored locally in the network.

The Aux socket on the back of the Nubert nuGo! ONE is a combination interface and both analogue input and digital output

In addition, the nuGo! ONE also has cables – both in and out: behind a hinged splash-water cover on the back of the IPX5-certified radio there is a combination socket, to which analog sources (3.5 mm jack) can be docked. On the other hand, the nuGo! ONE itself can be used purely as a source device and forward the received radio or Bluetooth signals digitally (Toslink) to external active loudspeakers, soundbars, separate D/A converters, etc. This is how the use of the nuGo! ONE become attractive as a pure tuner. Last but not least, thanks to the FM-HD compatibility, it is also available for digital services when traveling to North America.
Two 66 mm full-range speakers are responsible for direct sound conversion, which are supported on the bass side by a passive membrane. Yes, right, the DSP-supported Nubert nuGo! ONE operates as a stereo device – Nubert also promises “60 Hz depth”.

Haptics & usability of the Nubert nuGo! ONE 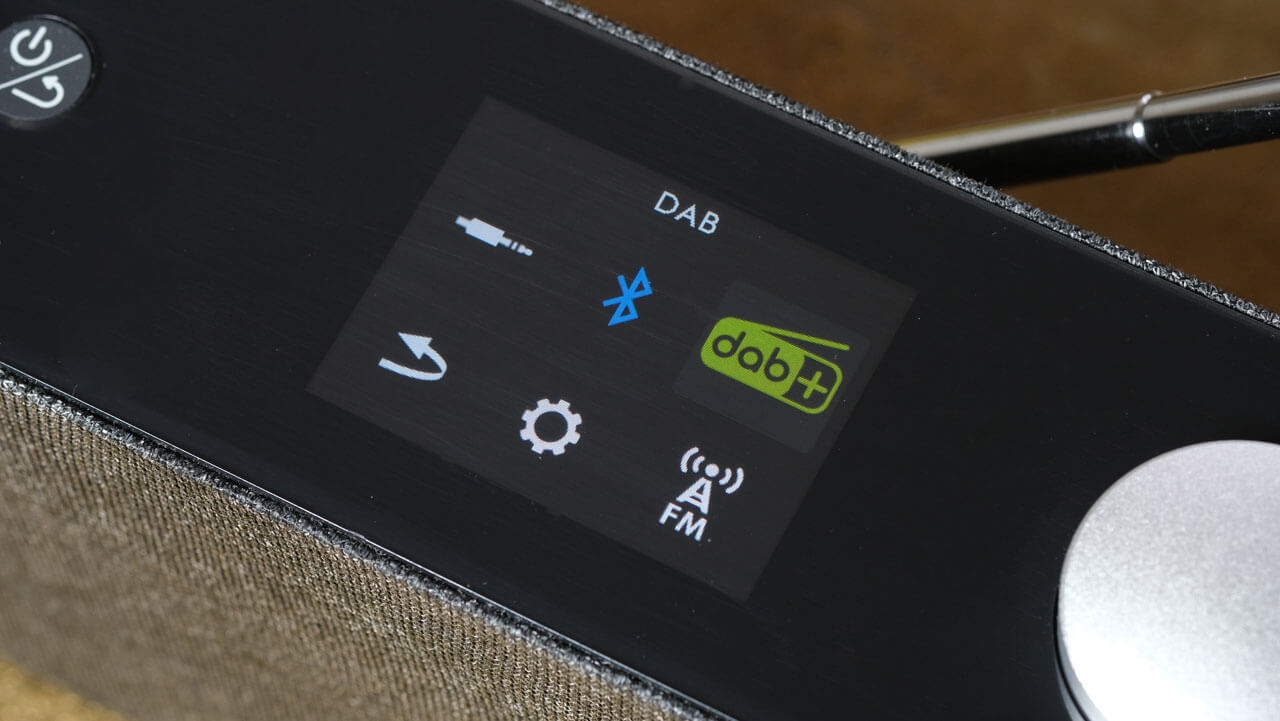 The functional areas of the Nubert nuGo! select ONE

With a view to processing, the Nubert nuGo! ONE makes a simple, elegant, high-quality impression, even if you press harder on the housing or try to bend it – in vain – there are no creaking noises that typically sound like plastic. The mottled gray acoustic fabric, which is stretched horizontally all the way around the radio, also feels pleasant and gives the radio a clean, yet non-technical, homely look. It is also commendable that the rubber feet on the underside not only allow for furniture-friendly and non-slip stand, but are embedded in the housing so extensively that they can hardly be detached even after long use.
Also made of rubber is the power button that closes neatly with the shiny upper plexiglass surface. The time between pressing the button when the device is switched off and the music starting is a little unusually long. It takes around 20 seconds for a DAB station to sound. 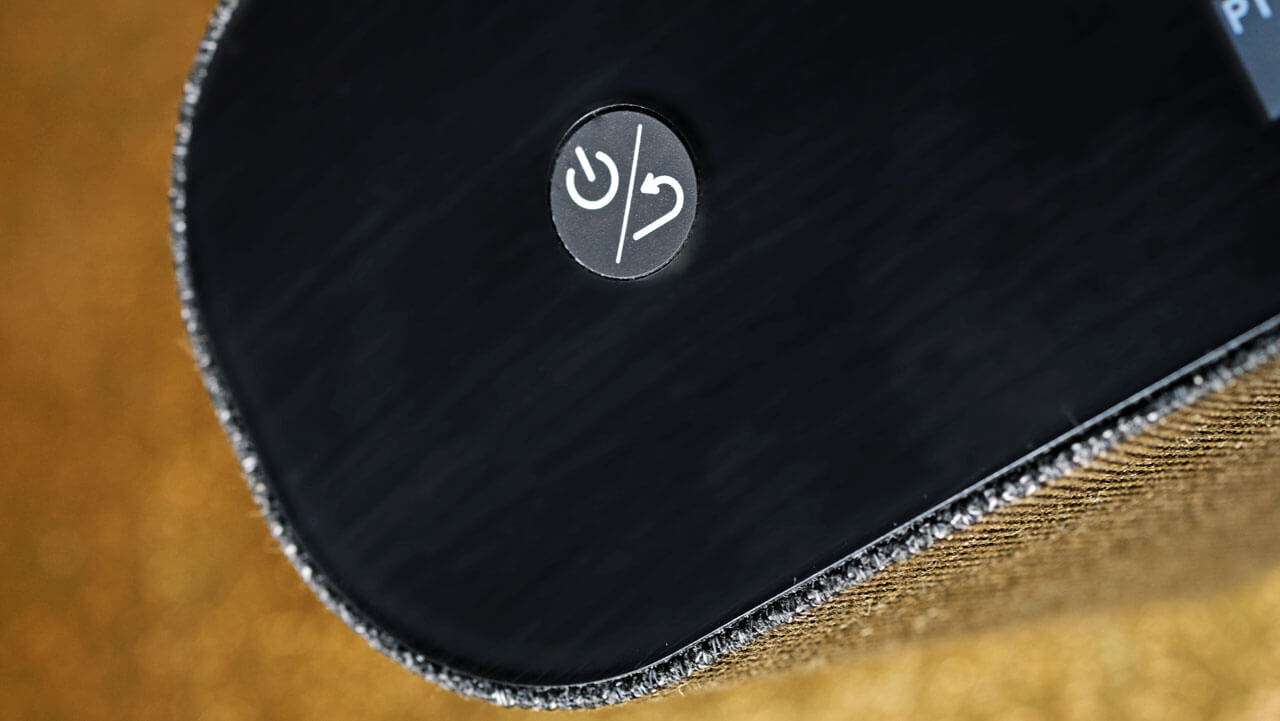 The simple, elegant look of the Nubert nuGo! ONE is also promoted by the fact that in addition to the on-off button, only a multifunction wheel is available as a control element. The operation is therefore not exactly intuitive. But once you figure out how often or how long you have to press or turn the multifunction wheel in the various modes, the operating concept of the nuGo! ONE, however, conclusively.
Of course, the radio also comes with a short instruction manual and a detailed instruction manual is also available under “Downloads”. Bluetooth pairing with the smartphone is absolutely smooth and self-explanatory. By the way: if you like, you can opt out of the Nubert nuGo! ONE can be woken up, the alarm function can be accessed via the “Settings”, including the snooze function, but without a second alarm time or individual alarm times every weekday.
The graphic topologies of the individual modes on the 2.9-inch OLED display appear tidy and clear. The bottom line, very good readability, will certainly be felt by many users as very pleasant in daily use. 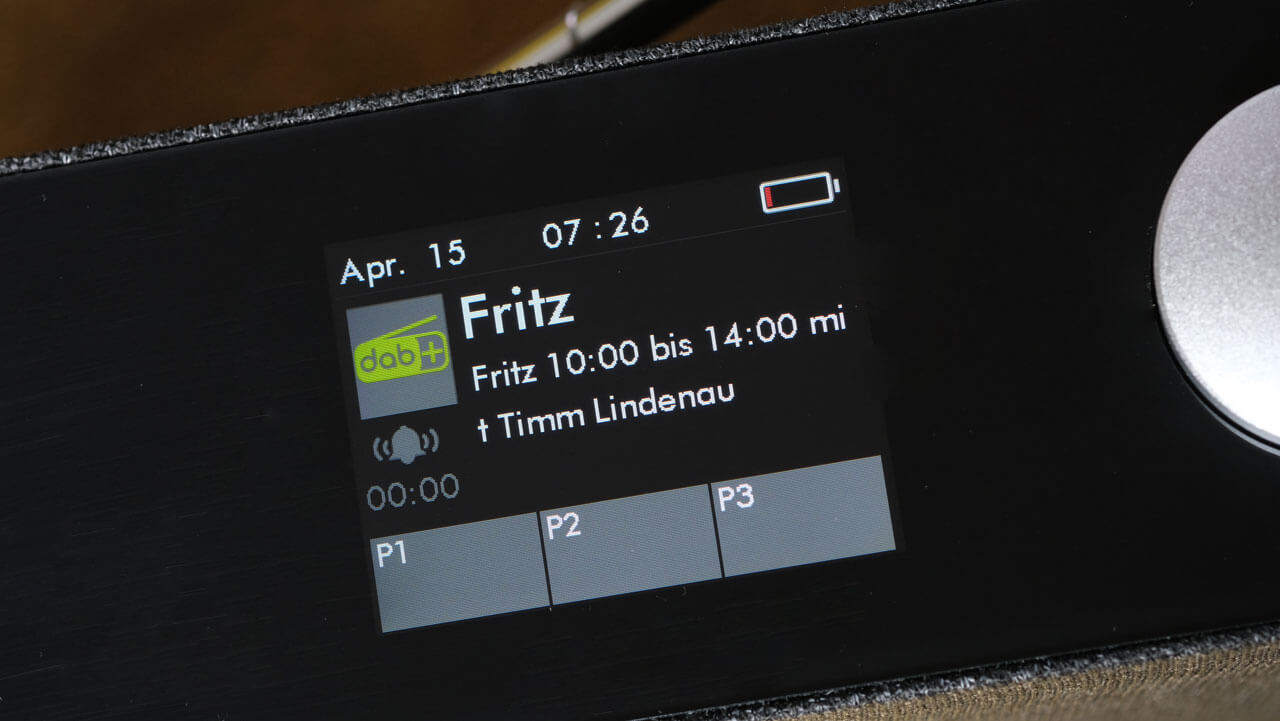 The 2.9-inch OLED display of the Nubert nuGo! ONE offers very good readability

The battery life deserves extra praise: We have the Nubert nuGo! Running ONE with a “DAB+” station at a volume level that is good for more than just background noise (-30 dB): The puff lasted for over 24 hours.

Stereo or not, a real spatial impression does not really arise even at shorter listening distances – but that is in the nature of things, how could it be otherwise with such a handy device? It is much more important that the Nubert nuGo! ONE even in listening rooms measuring more than 30 square meters and at greater listening distances everything else sounds thin, tinny or puny, but in view of the size it provides an amazingly substantial, pleasant sound. And logo, the nuGo! Of course, ONE uses a raised bass for such a feat. However, in a form that cannot be compared with the excesses of common Bluetooth bars from some prominent manufacturers, for example, and which therefore does not appear uncomfortably puffed up, even at short listening distances. 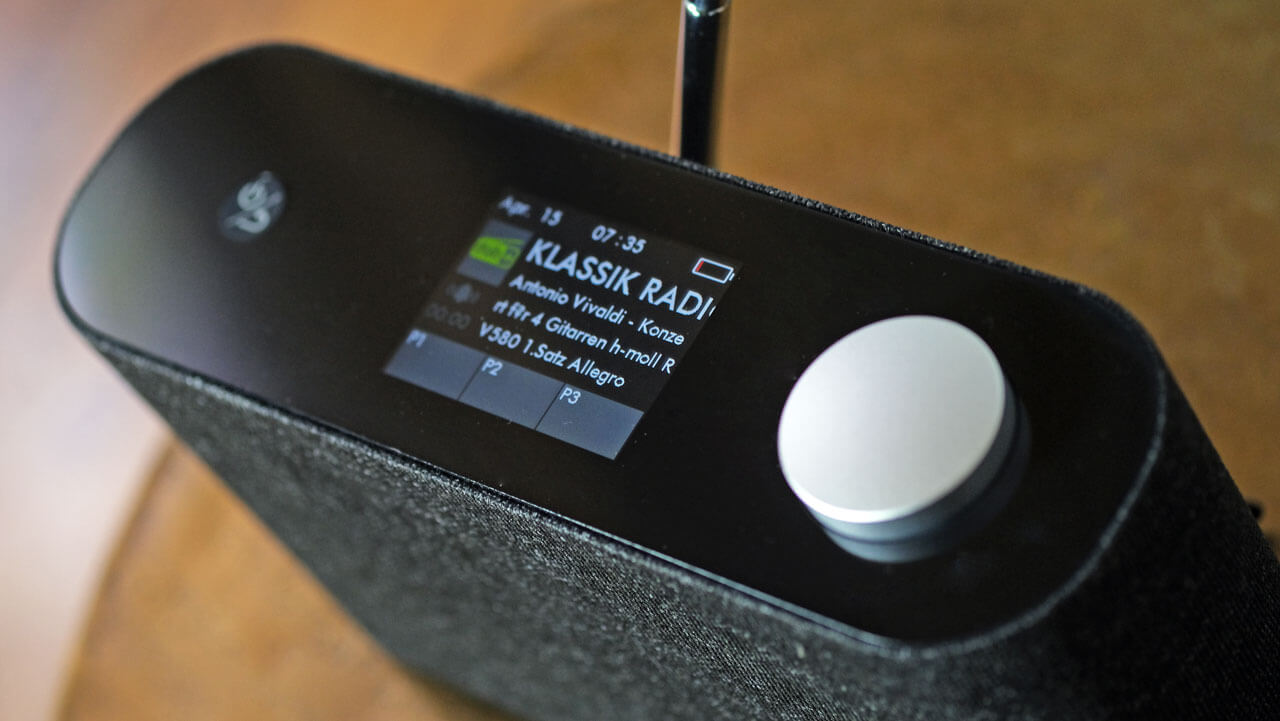 The Nubert nuGo! ONE can do classic too

Apart from the bass and the slightly present note of the mids that promotes speech intelligibility – also typical for such a device – the Nubert nuGo! All in all, ONE has a balanced, dynamic sound image for its class, which is more gripping and robust than distinctively subtle. Last but not least, the high tone, which is suitable for long periods of time, deserves praise; the Nubert developers have probably also deliberately avoided using broadband drivers to set airy, silvery highlights at the top, which may be impressive when listening quickly, but are annoying when listening to music for a long time. 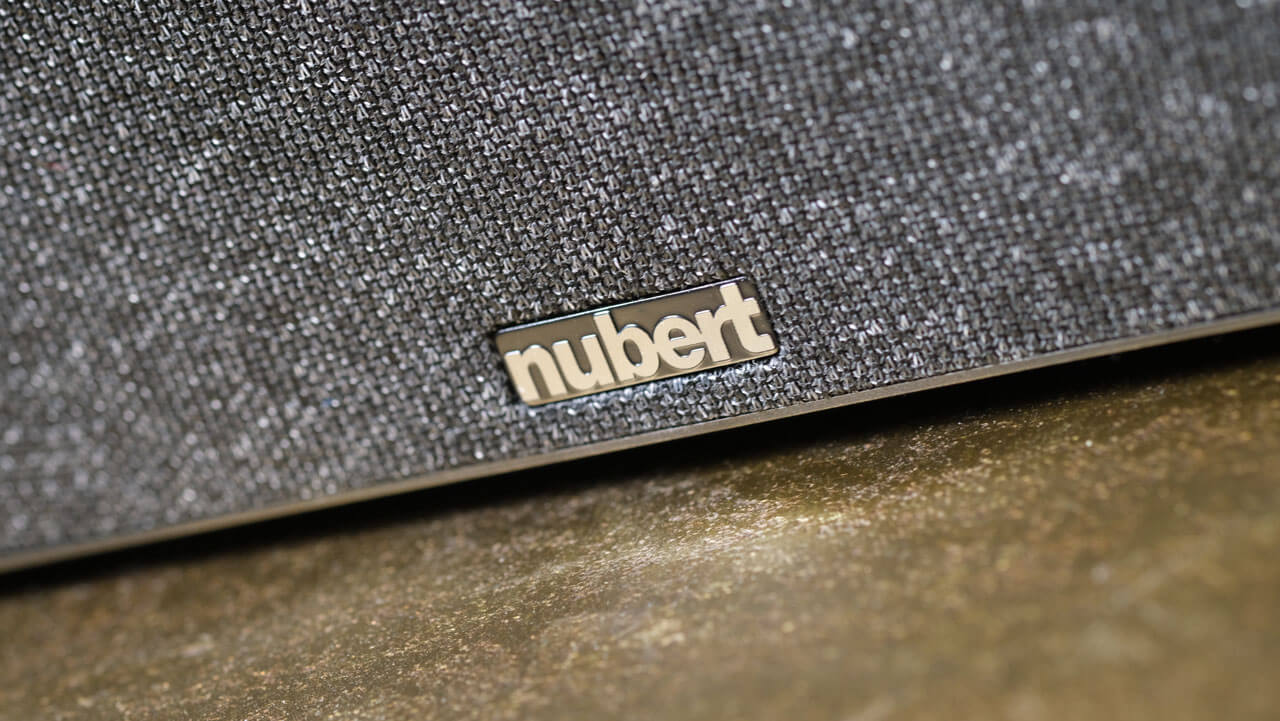 In the price range of the Nubert nuGo! ONE there is a whole range of radio receivers with even more features (e.g. with network/Internet capability), but Nubert has managed to conjure up a surprisingly substantial sound from a compact housing, without doing it like many other manufacturers with the bass boost or other “tricks ‘ to exaggerate too much in the frequency response. The nuGo! ONE therefore offers a pleasantly “all-round” sound pattern for all types of music for its class.
The Nubert nuGo! ONE can now be ordered in the Nubert web shop at a pre-order price of 249 euros .

This article has been published on the website : fairaudio.de