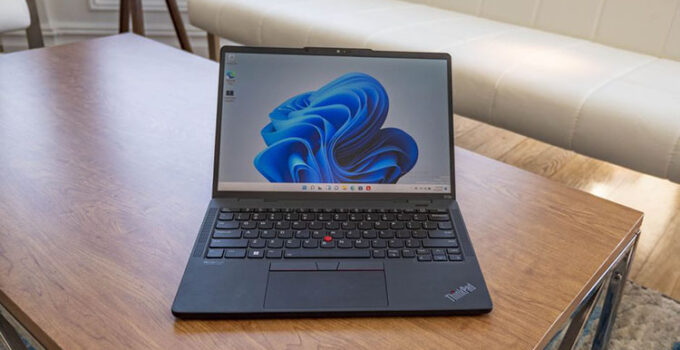 In the Apple world, the ARM architecture of the Wintel competition is currently making serious competition: applications such as video editing often run faster on ARM Macs, but above all they use significantly less energy than on x86 computers. With Qualcomm’s Snapdragon 8cx Gen 3, there is now (according to self-promotion) a powerful ARM SoC for Windows computers. The Lenovo Thinkpad x13s is the first device with the chip, but Microsoft has already announced several Surface devices with the 8cx Gen 3. c’t 3003 tested the x13s extensively – and was amazed.

transcript of the video

(Note: This is bonus content for people who cannot or do not want to watch the video above. The video track information is not reflected in the transcript.)

In this video I test Windows on ARM on the currently fastest ARM notebook available: The fanless Lenovo Thinkpad x13s with the Qualcomm Snapdragon 8cx Gen 3. I used the device as my main work computer for two weeks. And to be honest I was pretty hyped, because after all the current Apple computers show how fast and efficient the ARM architecture CAN be. I made a video about it back then: The Apple M1 easily blows away Wintel processors in many disciplines. So, and now the whole thing again under Windows, I thought. Yeah, nope, the performance of the thing is not only disappointing, but in some respects even catastrophic: the x13s, for example, just can’t do video editing – it really just CANNOT do it, so none of the relevant programs are running: not Adobe Premiere, not Da Vinci Resolve and not even Kdenlive properly. Just can’t. With a computer for over 2100 euros. Stay tuned.

This is the Lenovo Thinkpad x13s. Next to MacBooks, THE Thinkpads are probably the best-known notebook brand in the world. The first Thinkpad came out in 1992, at that time still from IBM. In 2005, Lenovo took over the brand. Yes, and I would go so far as to say that these are THE iconic Windows notebooks, a little bit uncool, but also pretty cool because of this boxy, unstyled look. Definitely really tough workhorses. And with this red mouse pointer nubsi here you can see them straight away.

Thinkpads have always been x86 architecture, but now the x13s is the first with ARM, i.e. the processor architecture that nowadays runs on almost all devices apart from most Windows and Linux computers, i.e. smartphones, tablets, televisions, Raspis, VR -Headsets… For years, ARM was always considered the energy-saving architecture for the “small” devices – but since Apple switched completely to ARM and even equipped its fat studio computers with it, it’s clear that ARM also has potential for performance-hungry applications, x86 to make look old.

So. And now, with the Qualcomm Snapdragon 8cx Gen 3, there’s finally a powerful ARM processor for Windows computers – at least that’s what Qualcomm says. The thing is advertised on the Qualcomm website with “extreme performance”. And it’s also currently the fastest chip for Windows on ARM, but there’s no serious competition either. Lenovo’s Thinkpad x13s is the first device with 8cx Gen 3 on the market, but others have been announced, including a Surface directly from Microsoft.

The x13s I tested here is the variant with a 5G SIM card slot and 32 GB of RAM, which costs 2139 euros in this configuration. The cheapest x13s Thinkpad costs 1719 euros and then has no SIM slot and only 16 gig RAM. Incidentally, Lenovo loaned us the test device.

You can tell right away that this isn’t a cheap device: nice display with 1920 x 1200 pixels, nice case with magnesium alloy, keyboard with a high-quality feel. So far all good.

And even when fiddling around in Windows for the first time, there is no indication that the “normal” Windows is not running here, but the Windows on ARM variant. It’s not in the release notes either, you can actually only see it if you go to System and then About, where it says “System type: 64-bit operating system, ARM-based processor. In fact, a lot has happened to Windows since Windows RT in 2012: that earlier Windows for ARM machine only allowed you to install software from the then very new Microsoft online store – which means there’s very, very, very little software for it existed.

With the current Windows on ARM – Windows 10 and Windows 11, by the way – a compatibility layer runs in the background, an emulator, so to speak, that converts x86 or the 64-bit version of it, i.e. x64 code, into ARM code. It actually works well at first, so you can easily install very unpopular software, for example the control software I use every day for my video lamp. And I didn’t have any problems with drivers either, everything I connected to the x13s worked right away, i.e. external hard drive, audio interface, webcam. So far everything is fine.

But then after spending some time with the laptop, the problems started so slowly: For example, Firefox froze regularly, so that I had to restart it again and again. And that, by the way, even though Firefox is a native ARM version. In fact, I only noticed this when I wanted to uninstall Firefox, i.e. in the “Add and Remove Programs” menu, because then it said “AArch64”, which is the name for the 64-bit flavor of ARM. Windows really isn’t very talkative, you can’t expect that you’ll automatically notice what exactly is happening at the system level.

In any case, after the constant Firefox crashes, I was forced to switch to the preinstalled Edge browser, which is also ARM-native, by the way. It ran stably, but showed me a list of really nasty clickbait articles and ads with every new window. (I know you can personalize this, but still ugh.)

Good, so Browser, Office, Teams – all works ok with x13s. In fact, it also FELT somewhat spongy. Games without high hardware requirements also work. BUT: If you look at the comparison benchmarks that my c’t colleagues made, you can see that there isn’t a single one in terms of CPU performance (i.e. in Cinebench) and 3D performance (in 3D Mark Timespy). comparison notebook in the same price range performed so poorly. In the Cinebench multi-core values, almost all devices managed more than DOUBLE as much. If you’re thinking, yes, ok, benchmarks tail marks, yes, you’re right, what counts is the perceived speed; and it’s ok for office applications and browsing. BUT: You probably don’t buy a 2000 euro notebook for a bit of Word and browsing.

So let’s open the Adobe Creative Suite: Häää, what? Why isn’t all the software displayed there? So, for example, there is no Premiere here and no After Effects either? whaat? For comparison: This is what it looks like on an x86 computer. Well, that’s not a mistake, that’s actually the reality: There is only Photoshop and Lightroom as an ARM version, the other software should or can’t run under the x86 emulation and can therefore not be installed at all here via the Adobe Creative Suite subscription software. Okay, then I’ll try DaVinci Resolve, which I think is better than Premiere in some respects anyway: Well, you can install it, but you can’t start it. Then this error message always comes up. I then installed the open source video editing program Kdenlive as a last resort: Well, it worked, but with our 3003 4K video files it was so slow that it couldn’t be used – whenever you wanted to skip somewhere, it took several seconds for the image to build up. And after a few minutes, Kdenlive crashed too.

And another software I use regularly also refused, Dropbox. Dropbox only offered me the Microsoft Store version, which is little more than a wrapper around the Dropbox website. But what I actually want (and that’s probably how most people feel): A Dropbox system software that automatically synchronizes folders without you having to interact with them manually in any way. But the ARM Dropbox version cannot do that.

And now you might think, yeah, ok, it’s not a performance king, but the battery will definitely last forever. Unfortunately not even that. Apparently, software updates ensured that the x13s lasted 22 hours in my tests with an idle desktop – in the test by my c’t colleagues a few weeks ago, it was only 12 hours. But even these 22 hours are not an absolute revelation. The HP Specter Folio 13, which is also fanless, managed a whopping 40.7 hours in our 2019 test with an idle desktop and 100 cd/m2 screen brightness. Even with the smaller 47 watt-hour battery, the Thinkpad x13s has 50 watt-hours.

The x13s is a super processed, very light (1.06kg!) notebook with a good keyboard, fine display, everything is great. BUT: If you want to do more than Office and browsing, you are really wrong with the ARM Thinkpad. Especially that there is currently no way to use video editing software like Adobe Premiere and DaVinci Resolve is pretty tough. And as of today, this restriction applies to all Windows-on-ARM devices, including those that are yet to come.

The only thing that speaks for Windows on ARM: that the devices are fanless. In fact, the x13s is the only newly introduced Windows notebook without a fan, otherwise there’s only the Macbook Air. Incidentally, the device class “passively cooled Windows notebooks” was still a thing a few years ago, when Intel’s Y dual-core processors still existed , which were limited to 4.5 watts. But unfortunately that’s over for the time being – let’s see if something comes up again in the x86 world. And let’s see how things continue in the ARM universe. Last year, Qualcomm bought the chip design company Nuvia, which was founded by former Apple engineers. Nuvia is working on high-performance ARM chips – let’s see if that might still be something with serious x86 competition on Windows. In any case, with the current chips this will definitely not happen.

And again something very brief about our own affairs: c’t 3003 is supposed to grow and that’s why we’re looking for people who can support us with the scripting. If you can imagine writing scripts for 3003 on a freelance basis: We look forward to hearing from you at 3003@ct.de. Bye!